The creation of Arancio and all of its facilities was done with the environment in mind. A large amount of time and resources were invested in not only creating the winery and all its vineyards from scratch, but to do so in such a way that they would have a minimized environmental impact. As a result, in 2002 Feudo Arancio was the first Italian Winery to receive the ECO Management and Audit Scheme certification for the entire productive chain. Feudo Arancio assessed its initial environmental condition, drafted plans for environmental impact improvements and committed to an external auditing system that evaluates the results of these projects. This certification plays a large role in Arancio’s efforts to promote the image of grape growers and producers as guardians of the land instead of exploiters of the land. Prior to EMAS, Arancio’s environmental management system had been certified according to the internationally recognized set of requirements of UNI-EN-ISO 14001. 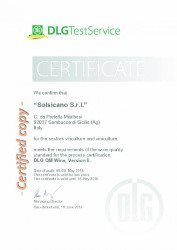